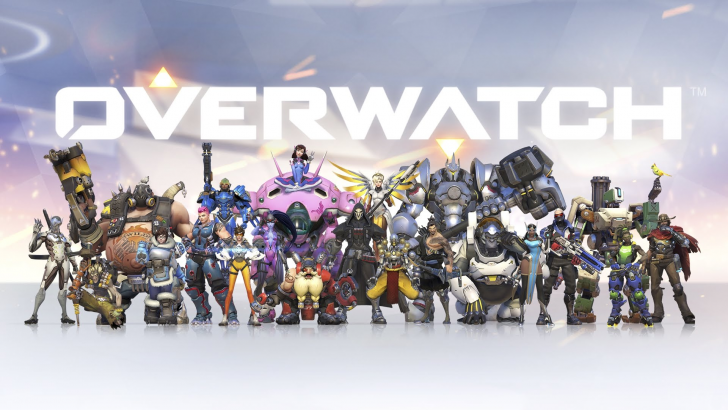 As you might have seen in my live streams, I have been playing Overwatch for nearly a week now. I decided to buy the game last week, since many of my friends are playing it as well. I always want the most expensive version when I buy a game. Unfortunately, expensive versions are.. expensive. That didn't keep me from buying the Overwatch Collector's Edition though!

The box itself looks great. Mine has a little shelf wear, but I don't mind too much, since I was already very happy a Collector's Edition was still available. The box actually is a box in a bigger box, and can be pushed out with a hole in the bigger box. It has all of the playable heroes of the game featured on its side.

Once you push it out, you can finally see all of the heroes. It can then be flipped open from the middle.

So, as you can see, the box itself is really great and well made. But enough about the box already! Let's see what's inside! Once you open the box, you can immediately see the statue, which takes up the entire left side of the box. On the right side is a bit of protecting foam, and underneath it you can see the colorful artbook.

The artbook is held in place by a string of Velcro. It is pretty large in size, and comes with a nice protective cover. This also ensures the artbook is well protected against dust and stains. The cover has an Overwatch style, which nicely completes the white cover of the artbook.

Once the artbook was removed from the box, the game and soundtrack became visible. I must admit, I haven't even touched the soundtrack up until now. Who uses CD's nowadays anyway, right? Well, if you want to listen to the tracks, you nearly have to. Fortunately, I found a YouTube video that contains the entire soundtrack. Or, you could just start the game, since all of these songs seem to be played at random in the menu's and loading screens.

This is the video that contains the entire soundtrack:

You do get some fancy plastic cards, which include codes for bonuses in other Blizzard games. The bonuses include the usual 20 day trial card for World of Warcraft, A free card pack for Hearthstone, and a free hero for Heroes of the Storm. The Noire skin for Widowmaker, a hero in the game, is a pre-order bonus which is also included as a code.

In the box, underneath the game, there is a set of 12 high quality postcards. They are pretty thick, and feature all of the current maps that can be played in the game. They are pretty neat, and I personally really like the Hollywood one.

As soon as you open the box, you will see a small instruction on how to get the statue securely on its base. doesn't seem to hard or complicated. You need to spread the legs of the statue a bit.

Inside the box is the usual Styrofoam packaging. It's only one piece of packaging for both the base of the statue, and the statue itself. The Styrofoam features the Blizzard and Happy Worker logos on the front side, and the Overwatch logo on the back. You will need to cut through some tape on the edges of the Styrofoam to open it. Once opened, you can see the statue wrapped in some protective plastic. The base for the statue is hidden in a separate compartment of the Styrofoam, which has its own Styrofoam lid. I must say, the packaging is great. It just completes the feeling of unpacking a valuable item.

The base has an extra protective layer of plastic to prevent any scratches. You will have to remove it before inserting the statue though. It has some nice weight on it, and has some branding on the bottom.

The statue looks awesome, and has a lot of detail. The colors are pretty dark, but I really like the look and feel of the statue. The only big question is: why Soldier 76? Why not Tracer? She is pretty much the face of Overwatch in all posters and on the cover of the game. Part of the answer might be that a Tracer statue is up for sale for $150 in the Blizzard shop, and despite its price, it has been out of stock for a pretty long time. If they were to include her in this Collector's Edition, even if it was a totally different statue, they would not have sold so many.

The statue is nearly an inch smaller than the one from the Uncharted 4: Libertalia Collector's Edition. The quality of the statue feels much better though, and where Nathan kind of looks down, Soldier 76 stands and looks you in the eye, with all its pride.