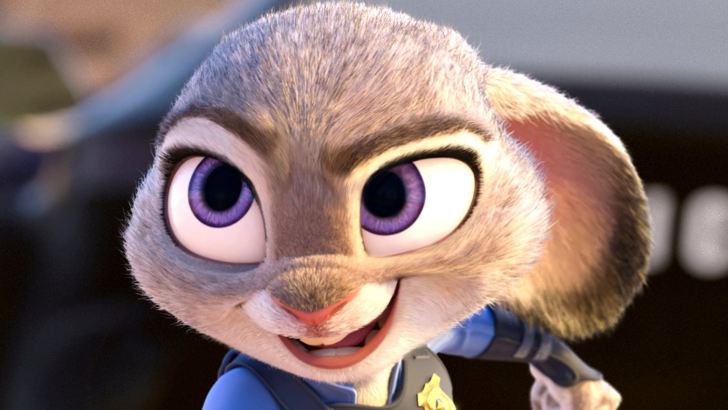 Zootopia is an animated movie about Judy, a rabbit that lives in a small town. Judy wishes to become a police officer in the large city of Zootopia, where all animals live together in harmony. That means predators and prey alike. They are all equals, and do not eat each other. You can imagine a bunny in the police corps is kind of a big dream, since she might have to arrest a tiger or even bigger animals. That's why the police corps consists of mostly big animals like tigers, rhinos, bears and buffalo's.

First off I have to say the animation of the movie looks stunning! You can see every whisker and every hair on all animals. Not that I expected less from Disney in 2016, but the quality is just superb. Zootopia is divided in 12 districts, and each district has its own climate (tundra, rainforest, desert, etc.). It doesn't matter what animal you are, there's always a climate that suits your needs in Zootopia. The different climates in the world of Zootopia make the movie extra colorful and pleasure to watch.

As we all know after watching the trailer, Judy becomes the first bunny cop, and eventually she gets her first case. In order to solve this case, she is forced to trick a fox into working with her. Foxes are cunning animals, and bunnies are usually on their menu, so she has to be extra careful. Especially now that some animals went savage, and can't control their hunting instincts.

The 108 minute long movie is packed with jokes, action, and tense moments. It might be a bit of a long movie for the younger kids, but I think it will be able to keep them interested until the credits at the end. There's a lot of jokes for the older audience as well, such as references to the godfather, and the fast increasing population of Bunny Burrow.

The movie did feel a bit "American" all around, with the "You can become whatever you want" and "Chase your dreams" attitude, as we could expect from a company like Disney. This didn't bother me too much though, as the many jokes and sarcasm make up for it by tenfold.

I was really surprised by the overall story, with some interesting plot twists in the movie that even I did not see coming. The "bad guy" remains a mystery until the very end of the movie, which is refreshing as well.

Of course a Disney story has to have a moral. It could not be missed, as the entire movie just screams: "Don't judge others based on how they look". The writers did a good job here. They used all the right characters and made us judge them by their actions instead of their looks, although they did keep some prejudices alive. The fox for example, is pretty sly, while the bunny can be considered as cute.

The soundtrack is sung by Shakira, and the music video contains some pieces from the movie as well. Shakira actually has her own character in the world of Zootopia, named Gazelle. Her soundtrack can be heard on several occasions during the movie, as everyone in Zootopia seems to be a fan of Gazelle.

Zootopia is a great movie, and contains all the elements of a true Disney movie. It has a good story with plenty of jokes and action for both the younger and older audience. Even though morals and "Americanization" sometimes bug me, this movie gets away with it.