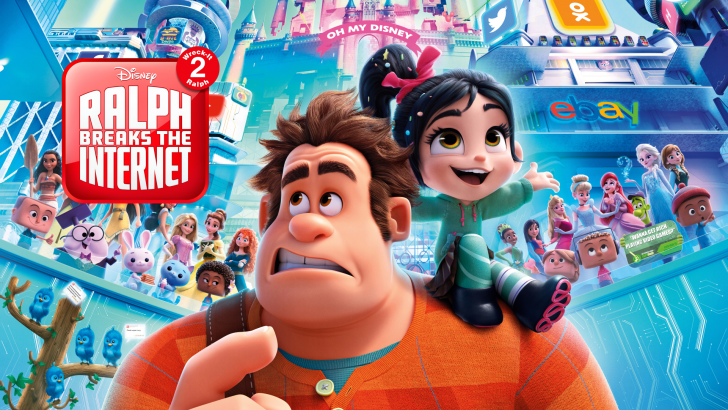 Ralph breaks the internet is the sequel to Wreck it Ralph, which came out in 2012. This sequel takes place 6 years after the first movie. Ralph and Vanellope became best friends, and still live in the arcade hall. When Vanellope's arcade game breaks, they have to go to the internet to find a replacement part.

The way they portray the internet is very well done! They show the internet as some sort of major city. All website's have their own "inhabitants". E-bay is portrayed as a huge auction house, with 1 auctioneer per item, Twitter is portrayed as a tree, with thousands of blue birds with speech bubbles, and there are many more references to popular websites. Of course Disney promotes their own site as well (Oh my Disney). This is where most of the cameo's take place. There are so many, you will have to watch several times to see all the cameos in there. The biggest cameo is of course all of the Disney princesses. They even flew in all still living voice actors of the original movies for this!

The movie is made by Walt Disney Animation Studios, which made most of the original Disney movies. Merida is the only animated princess whose film was not made by this studio, and they make sure to mock that fact by letting Merida from Brave talk in Scottish slang. The other princesses proclaim they can't understand her, since she's from another studio (Brave was made by Pixar).

Vanellope also gets her own song, like every Disney Princess should have. It gave me La-la-land vibes because of the car theme. Although I think Sarah Silverman (who does the voice of Vanellope) isn't the best of singers, it still gives all the Disney vibes, and sounds kinda cute.

Near the end of the movie, there was less jokes and more action. I kind of missed the jokes, and feel they should've made a better combination of both jokes and action. That is the only downpoint to this movie in my opinion, but it's definitely not a deal-breaker. The after credits scene made up for the lack of jokes at the end though. I left the cinema laughing because of it, and I could still laugh about this joke 10 minutes later. Hell, I can still laugh about it right now. It's the following scene, which got cut from the original script:

The movie is filled with jokes. Most of them are for an older audience, although there's plenty of fun for kids as well.
The way they portrayed the internet is very well done!
Disney makes fun of themselves several times in this movie, and it truly is cliche and funny.
There is a new Disney song in this movie, which, lets be honest, makes it feel more like a Disney movie.
The movie is packed with references, cameos and encouters which will surely put a smile on your face.
I was entertained by the movie, all the way to the after credits scene, which was hilarious!

Towards the end of the movie, there were less jokes and the movie became more morale focused. I don't mind the morale always being present, but I'd love to have some jokes at the end as well.

Captcha recognition of Google (ReCaptcha-2 and ReCaptcha-3), Facebook, BitFinex, Bing, Hotmail, SolveMedia, Yandex,
and more than 12000 another size-types of captcha,
with highest precision (80..100%) and highest speed (100 img per second).
You can use XEvil 5.0 with any most popular SEO/SMM software: iMacros, XRumer, SERP Parser, GSA SER, RankerX, ZennoPoster, Scrapebox, Senuke, FaucetCollector and more than 100 of other software.

Captchas breaking of Google (ReCaptcha-2 and ReCaptcha-3), Facebook, BitFinex, Bing, Hotmail, SolveMedia, Yandex,
and more than 12000 another subtypes of captcha,
with highest precision (80..100%) and highest speed (100 img per second).
You can use XEvil 5.0 with any most popular SEO/SMM software: iMacros, XRumer, SERP Parser, GSA SER, RankerX, ZennoPoster, Scrapebox, Senuke, FaucetCollector and more than 100 of other programms.