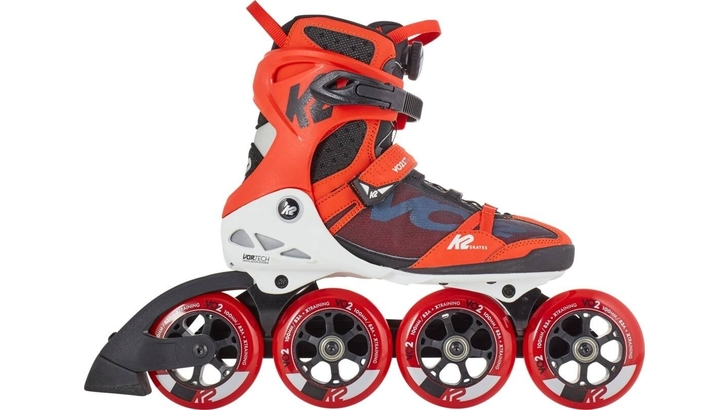 Yay! I got new skates.

8 years ago, I started skating again. I went to a skate store in Amsterdam since I really wanted Roces skates. It was the brand we used to have when I was very young, and I really liked those skates. So I tried on a whole lot of skates, and very soon noticed Roces was not my brand anymore. There was either way too much space around my feet, or they hurt. I decided to try other brands, and eventually tried on the newest K2 skates they had. Back then, the newest skates were the K2 Mach 90 skates.

What a difference in comfort as opposed to the other brands! The softboot and speed lacing system really made a difference. These were skates you could skate on for hours without your feet hurting on blisters popping up, which is exactly what I have been doing on nice sunny days.

After 8 years and the many, many kilometers of skating, I felt like it was time to replace these old skates with some new ones. Since I like long distance skating on pretty high speeds, I decided to go for skates with 100mm wheels this time. I knew K2 had these new "single frame" models, which were introduced in 2019, and they looked awesome! Due to the single frame, you can see the wheels really well.

I did wonder if the frame and screws holding the wheels in place would be strong enough. The skates seem to sell really well though, and I haven't seen any complaints anywhere.

I decided to buy the K2 VO2-S 100 BOA M model, and have already skated about 35km on them. The frame seems solid enough, and I love the 100mm wheel size! They are really really fast. They are not as agile as the 90mm wheels would be, but you can still do pretty sharp turns with them.

The BOA system is really nice as well. I tried on the K2 VO2-S 100 PRO M model as well, which is essentially the same skate, but with a fast lacing system. This BOA system really does make a difference for me though. I could tighten the skate much better with this system as opposed to the fast lacing system.

I hope I will be able to skate a whole lot of km on these skates. I'm off to a good start though, I've got plenty of time due to the whole COVID-19 situation going on right now, and the weather has been great all week as well!